The new Ford Ranger is upon us with the international reveal done recently, however the current Ranger still has some life left in it with Ford SA giving it a special send off with the Stormtrak special edition. We tested it to see if its worth waiting for the new Ranger. 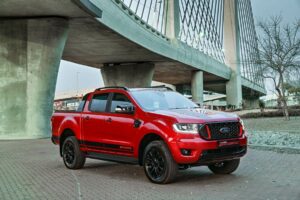 The current Ranger design has been around since 2010 with a major redesign done in 2015 and now in its twilight years, the Stormtrak doesn’t offer much in terms of design but the few design accents added are noticeable. First of all, the Stormtrak is a result of the success of the Thunder spec, which was also in limited numbers and due to this success Ford SA hasn’t deviated much from that design. It still gets the black grille with color accents on the outer ring design, black accents on the lower part of the bumper for an overall attractive design. LED headlights (with LED daytime lights) work a treat when driving at night whilst the black stripes on the bonnet are an acquired taste. 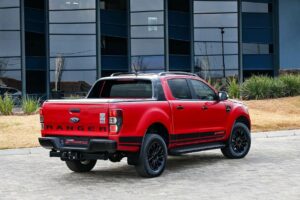 The side seas one get 18-inch gloss black wheels that accumulate dirt quite easily and I suspect will show pavement marks easily. Black side steps help with entry into the cabin as the Ranger is nice and high (just the way we love these bakkies). Roof rails are useful for carrying extra items on the roof whilst the much loved rear cape spoiler (from the Wildtrack) has been retained in gloss black finish. The rear is also as we used to with slight design accents in black and the Stormtrak signage ensuring no one mistakes this model for something old (trust me, there are many specs of this Ranger model). 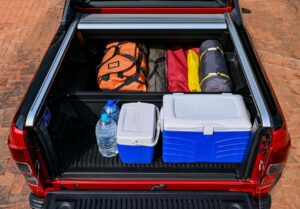 The rear loading cabin now features a very useful divider which also helps with limiting items from moving around the large load bin. We found this quite useful as one rarely puts items on the rear seats. The Power Roller Shutter is practical and allows enhanced security of valuable loaded at the back. The rear bin door locks when the central locking feature is activated, a very nice touch as most bakkies require you to manually lock the tailgate. 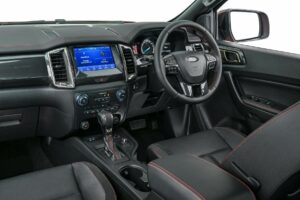 Inside the Stormtak can’t hide its age with the design now in need of the new “Trendy & Tech laden” design as seen on the latest Ranger. Quality fit and finish is amongst the segment leaders with red stitching on seats, dash, gear lever adding some excitement in looks. The touchscreen is ok but one sometimes struggles to operate when driving, needing more attention on it, something which can be dangerous on the road. The radio would change stations whilst listening to a selected radio frequency and this would happen whilst it’s still showing the selected station name on the screen. The front drivers seat is electrically adjusted and together with the adjustable steering wheel, it’s easy to find a comfortable driving position. 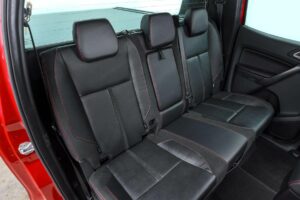 Rear seating was good for 3 people to seat comfortable over long distance but the lack of rear air vents meant in extreme heat (as experienced recently), the front passengers tend to suffer from this as they can be cold and still have the aircon in high speeds just to ensure rear passengers get cooler as well. 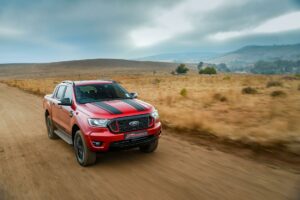 On the road, the Stormtak feels comfortable and rides well. There was an odd suspension noise when turning in full lock, something not experienced at the local launch drive so maybe it just needed greasing. Its easy to shift from 4×2 to 4×4 on the move with a toggle switch placed next to the gear-lever. Speaking of gear lever, the gear change button on the actual lever is not ideal when compared to shift paddles on the steering wheel. The 2.0-liter Bi-Turbo engine is credited with 157kW/500Nm driven through a 10 speed auto transmission. Initially the gear changes were not smooth and when I told a friend who works at Ford, they mentioned that there was an update to the gearbox software which was done to most of these cars. A 10 minute stop at the Pinetown dealer allowed this to be done and soon after, there was a noticeable difference in gear changes. 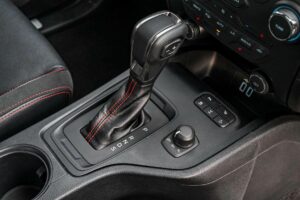 Driving in our pot holed and gravel roads in the Stormtrak instils confidence that whatever the road throws at you, the Stormtrak will come out smiling (bar the suspension squeaks on our test unit). Safety is catered for by multi airbags, front collision alert (very useful in traffic if fiddling with the infotainment screen), Radar cruise control, active lane keep assist, blind spot monitor.

At R846 500 for the 4×4 model (inclusive of VAT), its in the ballpark with competition – Toyota Legend 2.8 GD RS Auto at R891 200 being the fierce rival. Stock availability on Ranger models is also proving to be a huge challenge for dealers as well. All new Ford Rangers come standard with Ford Protect, comprising a four-year/120 000km comprehensive warranty, three-year/unlimited distance roadside assistance and five-year/unlimited km corrosion warranty. A six-year/90 000km service plan is included which covers six services. The recommended service interval is 15 000km or annually, whichever occurs first.